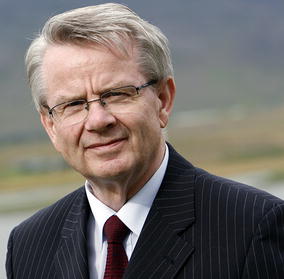 Professor Ragnar Sigbjörnsson passed away on July 15, 2015 after a short battle with cancer. Ragnar was a very influential teacher and researcher in applied mechanics, earthquake engineering and engineering seismology at the University of Iceland.

After finishing secondary school in Iceland, Ragnar headed to Denmark, where he earned a Master’s degree from the Technical University of Denmark (DTH) in 1971 and a Ph.D. from the same university in 1974. Following his studies in Denmark, he was hired as a research engineer at SINTEF, the research foundation of the Norwegian Institute of Technology (NTH), which is now called the Norwegian University of Science and Technology (NTNU).

Ragnar’s solid mathematical background was important for stochastic modelling of environmental loads, such as wind, ocean waves and earthquakes, and their associated effects on structures. His exceptional skill in applying knowledge to practical problems soon made him a prominent researcher at SINTEF in the development of safe offshore structures for the oil and gas industry and long suspension bridges, in cooperation with the Norwegian Public Road Administration. Ragnar worked at NTH/SINTEF until 1979. When he returned to Iceland, he took a research position and later a professorship at the University of Iceland. Although Ragnar lived in Iceland for the remainder of his life, he kept in good contact and collaborated with his colleagues in Norway. Ragnar was a professor at NTNU from 2009 until his death. In 1979, a textbook by Ragnar and Ivar Langen was published in Norwegian titled Dynamic Analysis of Structures.

When Ragnar came to the University of Iceland in 1979, he soon became a leader in engineering research. He was the director of the Engineering Research Institute during its development from 1983–1990. Ragnar also headed the Applied Mechanics Laboratory, a small research group. Gradually, his research focus became earthquakes research and their effects on structures. Ragnar established the Icelandic Strong Motion Network in 1986. In 2000, he founded the Earthquake Engineering Research Centre of the University of Iceland. He was its director until he retired in 2014 and the head of board of directors until his passing. The advances he initiated were important for Iceland, majority of its 330,000 inhabitants live close to seismically active areas.

Ragnar was very active in international cooperation and had numerous contacts worldwide. One of his most notable research collaborations was with the late Professor Nicholas Ambraseys of Imperial College, where Ragnar stayed as a visiting professor from 2001–2003. Among other work, they completed a review of an earthquake catalogue for Iceland. Ragnar was very enthusiastic about the last international project he worked on, the EU project UPStrat-MAFA in which researchers from Italy, Spain, Portugal and Iceland worked to improve earthquake hazard and risk estimation.

Ragnar was very open to new ideas and was not afraid of venturing into new research territory. He was well aware of the human element in engineering and his interdisciplinary work set an example for others to follow. Ragnar was a popular teacher and had tremendous influence as a mentor to numerous engineers and researchers in Iceland and abroad. Ragnar was among the most active and productive researchers at the University of Iceland and he received numerous awards for his work. In 2003, the president of Iceland awarded Ragnar the first Knight’s Cross of the Order of the Falcon for his work in the fields of science and education. Ragnar leaves behind a major legacy, and his work has led to great progress in engineering education and earthquake research in Iceland. He will be missed by many who will remember him fondly for his kindness and generosity when it came to sharing his vast knowledge.